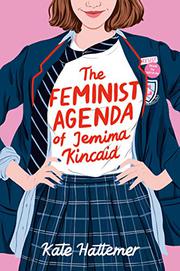 THE FEMINIST AGENDA OF JEMIMA KINCAID

In Hattemer’s (Here Comes Trouble, 2018, etc.) spirited coming-of-age story, senior Jemima Kincaid is ready to be through with high school. Just seven weeks from graduation, the self-assured narrator has had it with the decades’ old sexist conventions of Chawton, her Northern Virginia private school, whose history is steeped in “Old White Dudes running shit.” As one of the class leaders, Jemima is expected not only to partake in Chawton’s historic end-of-year celebrations like prom and Powderpuff—the all-female flag football contest—but help plan and perpetuate them. Nerdy, sassy, and passionate in her beliefs, Jemima is also conscious about being (like many of her peers) straight, white, and wealthy. A catalyst for Jemima’s growth is her best friend, working-class scholarship student Jiyoon Kim; her honesty heightens Jemima’s awareness around race, privilege, and internalized misogyny. Jemima also learns from her gay older brother, who describes his journey in overcoming internalized homophobia. When Jemima’s best-laid plans to rock Chawton’s patriarchal boat get hilariously shipwrecked, she’s forced to reckon in a thoughtful, incredibly compelling way with the consequences of acting on one’s convictions. Unfortunately, Jiyoon, who is described generically as Asian American, is a two-dimensional prop for Jemima’s character arc; references to her Asian identity lack emotional resonance and cultural texture.

Introspective in its exploration of budding sexuality and ethics; marred only by missteps in representations of diversity. (Fiction. 14-18)