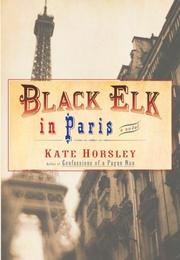 The connection between Philippe, a serious-minded physician, and Madou, the wild daughter of a well-to-do family, is strong and simple. Both have rejected the allure of love and sex, but likewise disdain middle-class morality. Madou, the more idealistic of the two, longs for spiritual adventure; Philippe, more prosaically, hopes to further the discoveries of medical science (he’s a doctor). The introduction of the sly, silent Black Elk into Madou’s life jars and upsets Philippe. With time, Black Elk gives him a subtle education in medicine, meaning and his own true nature. Philippe’s vocation finally draws him to Black Elk, who is slowly dying of a peculiar homesickness. In the meantime, Madou becomes prey to that most Parisian affliction, love, which will eventually lead to her incarceration in the Salpêtrière mental asylum. Horsley (The Changeling, 2005, etc.) has created a work of great philosophical playfulness. What’s more, she dresses it in the absinthe-laden glamour of the period and brings to life characters who are no less likable for being hyperbolic. The weakness of the book is in the plotting, which meanders at the whim of the author’s philosophical concerns and relies far too much on dreams and hallucinations.

An often enjoyable read, but one whose main conflict fails to convince, depriving it of force.