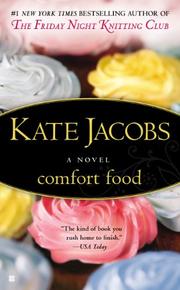 The lives and loves of a TV chef, her daughters, neighbor and associates all receive a makeover in this lighthearted but sometimes sagging romantic problem-solver.

Jacobs (The Friday Night Knitting Club, 2007) turns to the subject of food on television. Widowed control-freak and mother of two Gus Simpson, approaching 50, has been a star of the CookingChannel for 12 years with her show Cooking with Gusto! But now, under pressure to improve her drooping ratings, she finds herself sharing a new program—Eat Drink and Be—filmed in her own kitchen, with pushy Carmen Vega, a ruthlessly ambitious ex-Miss Spain. Helping out on the live program are Gus’s adult daughters Sabrina and Aimee, her neighbor Hannah (a reclusive journalist with a disgraced sporting past), one of Sabrina’s ex-boyfriends and Oliver, the show’s attractive producer. In a rather slack middle section, the story gets diverted down multiple paths, involving career, family, finance and relationships, while dodging from one mini-crisis or set piece to the next: a kitchen fire, a teambuilding weekend, a bride with extreme wedding nerves. But late in the day, Jacobs marshals her occasionally tepid characters, cuts back on the life philosophy, connects various predictable dots (and one or two less predictable ones) and delivers a slew of happy endings.

Not quite as satisfying as the title would lead us to expect.