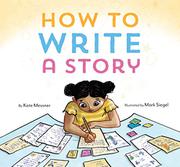 HOW TO WRITE A STORY

This follow-up to How To Read a Story (2005) shows a child going through the steps of creating a story, from choosing an idea through sharing with friends.

A young black child lies in a grassy field writing in a journal, working on “Step 1 / Search for an Idea— / a shiny one.” During a walk to the library, various ideas float in colorful thought bubbles, with exclamation points: “playing soccer! / dogs!” Inside the library, less-distinct ideas, expressed as shapes and pictures, with question marks, float about as the writer collects ideas to choose from. The young writer must then choose a setting, a main character, and a problem for that protagonist. Plotting, writing with detail, and revising are described in child-friendly terms and shown visually, in the form of lists and notes on faux pieces of paper. Finally, the writer sits in the same field, in a new season, sharing the story with friends. The illustrations feature the child’s writing and drawing as well as images of imagined events from the book in progress bursting off the page. The child’s main character is an adventurous mermaid who looks just like the child, complete with afro-puff pigtails, representing an affirming message about writing oneself into the world. The child’s family, depicted as black, moves in the background of the setting, which is also populated by a multiracial cast.

A lovely encouragement to young writers to persist.