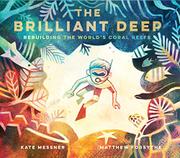 Rebuilding the World's Coral Reefs: The Story of Ken Nedimyer and the Coral Restoration Foundation

The story of Ken Nedimeyer’s brilliant idea and his work to restore troubled coral reefs.

Nedimeyer, son of a NASA engineer, grew up exploring Florida’s underwater world. As an adult, he became aware that the coral reefs he had loved were fading, even dying. He experimented with transplanting staghorn corals that had grown in his live rock farm. The transplants grew and became the impetus for his founding of the Coral Restoration Foundation, which now works internationally. Aimed at quite young readers and listeners, Messner’s hopeful tale begins with the one coral gamete that can found a colony and ends with an image of this one man whose efforts have spurred restoration. In between, she touches on how corals grow and form an underwater community and how this white scientist worked with his daughter and others to rebuild the reefs. In Over and Under the Pond (illustrated by Christopher Silas Neal, 2017) and other titles aimed at slightly older readers, the author has depicted habitats with convincing details about the animals. Here, it’s the pictures that portray the colorful underwater world; the text places more emphasis on a human’s background and his process. The unusual palette and soft edges of Forsythe’s large-scale illustrations add mystery to the marine world and will show well.

A charming piece of environmental good news for storytime.