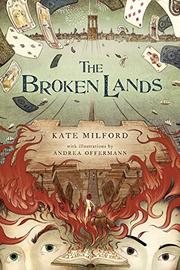 Two teens race against time to thwart the forces of evil in this prequel to The Boneshaker (2010).

The Broken Land is a hotel where much crucial action takes place, but it is also an apt description of the United States in 1877. The Civil War has scarred the country, and Reconstruction has ended. “Folks are angry, still,” orphan Sam is told. “Folks are scared and folks feel like punishing each other, and I don’t think many of ’em are clear about what they’re mad for.” It is also a time of technological marvels like the Brooklyn Bridge, although this particular wonder has come with a price for young Sam. After losing his father to illness brought on by work on the bridge, Sam finds himself working as a cardsharp in Coney Island. He becomes the unlikely ally of Jin, a Chinese girl working with a team to provide fireworks at Broken Land, as they find themselves resisting a figure seeking to establish his own Hell. This seamless blend of fantasy and historical fiction is ripe with rich, gritty detail. Best of all, it is populated by a vast array of unusual characters: Along with Sam and Jin, there's Tom, a former member of the U.S. Colored Troops, and Susannah, a biracial woman who may hold the key to victory.

Readers will be captivated.