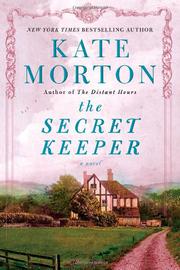 A daughter refuses to let her mother take a grim secret to the grave.

In 1961, Laurel, a teenager sulking in a treehouse, sees her mother kill a man with a knife intended for her infant brother’s birthday cake. During the ensuing investigation, the police question Laurel, who leaves out a crucial detail. Just before her mother stabbed him, the man had said, “Hello, Dorothy. It’s been a long time.” Dorothy is cleared—the man is presumed to be a wanted pervert whom she killed in self-defense, and the Nicholson family life goes on as before, with Dorothy, husband Stephen and their five children enjoying life in their bucolic farmhouse. An early flashback reveals that Dorothy may have had a shady past, which induced her to flee London in 1941, at the urging of her friend Vivien, who was subsequently killed in the Blitz. In 2011, Dorothy is close to death. Laurel, now a famous actress in her 60s, embarks on a quest to learn the truth about the homicide. First, she learns that her mother’s victim, Henry Jenkins, had once been a prominent writer who fell from grace. Flashbacks from Dorothy’s POV and Laurel’s research reveal that during the war, Dorothy, whose family was killed by German bombs, attempts to befriend her fellow war-work volunteer, the somewhat aloof Vivien, an heiress who was also orphaned when a car crash claimed her parents and siblings in Australia. But Vivien is married to the controlling, jealousy-prone Jenkins, an author who’s also involved in intelligence work for the government. When Vivien inexplicably insults her, Dorothy assumes that slander from Vivien also caused Lady Gwendolyn, Dorothy’s late employer, to deny her a hoped-for inheritance. Together with her fiance, the talented and sensitive photographer Jimmy, Dorothy plots revenge in the form of blackmail, threatening to give Jenkins evidence of Vivien’s infidelity. Despite some improbable developments, the suspense mounts throughout, culminating in a shocking twist.

Morton’s finesse with family secrets increases with each novel.