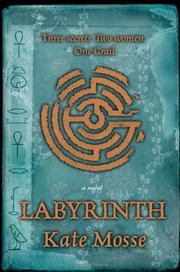 Dan Brown probably need not move over, but he may have to share the wealth with this well-researched tale, set in both contemporary and 13th-century France (Carcassonne), and featuring two intrepid heroines.

Written by the British literary insider who co-founded the prestigious Orange Prize for Fiction, this is a quickly paced adventure that wears its considerable learning lightly—and of higher literary quality than The Da Vinci Code, to which it will inevitably be compared. Its modern protagonist is 30-ish Alice Tanner, who joins an archaeological dig in the Pyrenees hoping to rev up her uneventful life, and makes an astonishing discovery while exploring a mountainside cave. Two skeletons and a ring bearing a labyrinth design lead, by an agreeably circuitous route, to a mystery related to the story of the Holy Grail, dating back to the culture of ancient Egypt—and attracting various shady characters with vested interests. Meanwhile, in a parallel narrative, teenaged Alaïs, daughter of one of the Grail’s appointed guardians, is entrusted with an invaluable book, one of three that together reveal the Grail’s long-hidden secrets. Further complicating Alaïs’s burden is the fact that her family are Cathars, a gentle religious sect who believe that Satan created Earth and God the heavens, and have thus incurred the land-grabbing enmity of northern neighbors who persecute them with genocidal efficiency, in what has since become known as the Albigensian Crusade. Mosse moves briskly between the two narratives, painting an impressively dense picture of life in the farming region then called Languedoc, and devising nifty matching situations and characters (e.g., two obstreperously venal femmes fatale). It all works smashingly until late in the story, when an ill-advised (and quite overlong) summary of the history of the Grail legend brings the drama to a stuttering halt.

Fun for most of the way—and very likely to be one of next summer’s popular vacation reads.