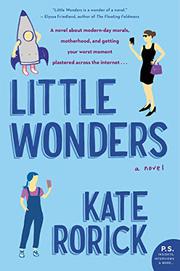 Quinn Barrett just wants everything to be perfect—her house, her job, her marriage, and, most importantly, her son’s preschool. That’s why she’s the Parent Association president, aka the person who gets everything done. But when her son refuses to wear his (homemade, of course) costume in the school Halloween parade, Quinn has an adult-size tantrum—and, unfortunately, it’s caught on video. Now Quinn is known as “Halloween Mom” on the internet and in the preschool halls. Daisy McGulch Stone, who just moved to town with her husband and daughter, was the one who took the video. She didn’t mean for it to go viral and ruin Quinn’s perfect image, but she can't tell anyone that now. As a blue-haired, tattooed, D&D–loving geek, she already doesn’t fit in, and she doesn’t want everyone to know she’s the reason their school is in the headlines; all she did was send the video to her best friend in California, who passed it along. However, Quinn and Daisy have more in common than they think, and they form an unlikely friendship that makes both of them feel more at home in their homogeneous surroundings. But as Quinn’s life keeps blowing up and Daisy attempts to be herself, both women must figure out how to make the best of circumstances they never expected. Rorick (The Baby Plan, 2018), who is also a television writer and producer, includes plenty of nerdy pop-culture references, and her chatty, slightly snarky voice makes the pages fly by. Daisy's and Quinn’s struggles to fit into their roles as mothers while following their career dreams are relatable and often hilarious. Refreshingly, Rorick resists the catty mom dynamic and makes even the meanest moms appear both sympathetic and human.

A funny, highly readable look at modern mom culture and the dangers of parenting in the age of viral videos.