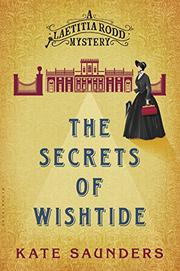 THE SECRETS OF WISHTIDE

Poking into a family matter on behalf of the family in question throws a novice investigator into more of an investigation than she bargained for.

In the age of polite society, it’s impolite for a lady to act like a snoop. So when Laetitia Rodd, widowed in her early 50s by her beloved Matt, decides to become an informal private investigator, she lets her brother, Frederick, do the dirty work of finding her cases. After all, he's a top criminal barrister with a number of clients who could do with some discreet snooping. Fred contacts Letty about a promising case involving Sir James and Lady Calderstone; with names like that, both siblings reason that the case may lead to a big payday. Charles Calderstone has chosen a most inappropriate match, the mysterious widow Helen Orme. His parents are determined to learn the truth about Mrs. Orme, whose rather vague tales about her upbringing have left them skeptical. Letty, taken on as governess to the two younger Miss Calderstones, quickly uses her connections to get the information she needs, all the while keeping up appearances, and unearths the secrets in Mrs. Orme’s past—along with the truth about the Calderstones, which the family is unsuccessful in keeping from their perceptive guest. Suddenly, Letty is solving quite a few more mysteries than she signed on for. Let’s hope she’s paid accordingly.

Without hitting readers over the head (as she does with many of her characters), Saunders (The Curse of the Chocolate Phoenix, 2015, etc.) launches a well-written series with all the hallmarks of a classic British cozy.