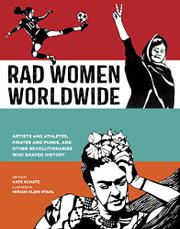 Artists and Athletes, Pirates and Punks, and Other Revolutionaries Who Shaped History

An international array of badass women through the ages and up to the present.

Though Schatz reaches back to Enheduanna, the first named author in history, and Pharaoh Hatshepsut, most of the nearly 300 women she names have shown their courage and convictions within the past century or so. Most are just names (with country of origin), but she selects around 60 for admiring profiles. Some are such familiar figures as Frida Kahlo and Malala Yousafzai, but many more are likely to be new to most, and not just younger, readers, such as Colombian street artist Bastardilla, British punk trailblazer Poly Styrene, and Dame Katerina Te Heikoko Mataira, a leader in the modern revival of Maori language and culture. The author also pays tribute to groups, such as the first 14 Madres de la Plaza de Mayo in Argentina, the six women charged with inventing ENIAC’s initial programming, and, poetically, the millions of stateless refugees. Arranged in a rough geographical order, the profiles open with tagline quotes, plus black-and-white-paper portraits based on photos or historical images, and run to one or two double-columned pages in length. Though an afterword lays claim to much research and personal contact, there are no specific sources cited. Still, it’s clear enough that these women lead or led “awesome, exciting, revolutionary, historic, and world-changing lives.”

More inspiration than documentation but definitively global in scope, a happy contrast to so many Eurocentric “world” surveys.