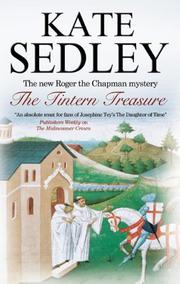 Doing a favor for his wife involves Roger the Chapman in yet another complicated and possibly treasonous mystery.

Now that he’s taken over the throne of England, Richard III faces opposition from several fronts. Because Roger has done some tasks for Richard, many people are convinced he is a spy for the king and treat him with more respect than most peddlers would command. But not Roger’s wife, who asks him to go check on an old friend in Hereford. He finds her well but, disconcerted by rumors that the town will be attacked by rebels, seeks refuge with his traveling companions at nearby Tintern Abbey. There Roger, his fellow peddler Yorkshireman, Oliver Tockney, lawyer Heathersett, wealthy goldsmith Gilbert Foliot and wine importer Henry Callowhill, all from Bristol, witness a robbery at the abbey. Many years before, a secret cavity had been found containing some pages and a book of little interest. Now it seems that the cavity was much larger than anyone thought, and the thief has stolen something of real importance. When his body is found in the river, it turns out that he was also from Bristol. Upon their return home, members of the group have their houses broken into—all except for unfortunate Tockney, who’s murdered in the street. Once the king’s real spy is unmasked, it’s up to Roger to discover what certain people are willing to kill to find.

Although Roger’s latest is far from the most exciting of his long series of adventures (The Midsummer Crown, 2011, etc.), it still provides the usual meticulous historical research along with a satisfying mystery.