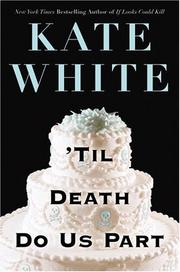 ’TIL DEATH DO US PART

White’s take on Four Funerals and a Wedding is a gift to every girl who’s ever looked for another reason to avoid being a bridesmaid.

The wedding of Peyton Cross, a Martha Stewart act-alike, may have been picture-perfect, but the sequel’s been no honeymoon for the friends who stood up for her. Jamie Howe’s been electrocuted in her bathtub, and Robin Lolly’s fallen victim to a lethal combination of antidepressants and forbidden foods. Interior decorator Ashley Hanes, another member of the wedding party, begs Gloss magazine true-crime writer Bailey Weggins (A Body to Die For, 2003, etc.) to look into the deaths. But Bailey, who assures us she’s “not connected to the glittery, glossy side” of her fashion mag, is skeptical. After all, “why would someone want to pick off a bunch of bridesmaids?” Accompanying fearful Ashley to Peyton’s stronghold in toney Greenwich, Conn., Bailey doesn’t get any quick answers. But she does get more evidence when Ashley herself is found dead, apparently the victim of a third fatal accident, leaving Bailey one of three surviving bridesmaids. The cops blow Bailey off; Peyton’s too self-absorbed to lift a finger; the surviving wedding participants simply point at each other; and Bailey’s weekend squeeze is too busy breaking up with her to help. Looks as if it’s up to Bailey to figure out which of Jamie’s wedding photos will nab the killer.

Another dish of smooth, upscale gossip laced with low-grade mystery-mongering.