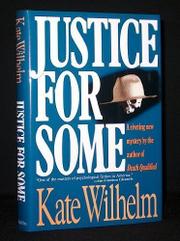 The morning after Judge Sarah Drexler arrives at her elderly father's place in East Shasta, Oregon, the old man, a water gardener, is pulled out of one of his own fountains; and a week later, news comes that a Fran Donatio, a private detective he'd hired, was killed on the road back home. What was Donatio investigating for Ralph Kellerman—some secret that would've ruined his brother Peter's chances of getting a prestigious chair in biochemistry or his nephew Michael's new job as a university provost? The financial status of the Lister Institute, honeycombed with Kellermans? Or the truth about the disappearance of three boys from Ghost Lake 30 years before and the haunting of the lake ever since? And will Sarah find it in herself to use the facts she gathers against somebody in her family—perhaps one of her own children? Fluent and accomplished, but altogether more routine than Death Qualified (1991), veteran fantasist Wilhelm's truly unusual last excursion into detection.