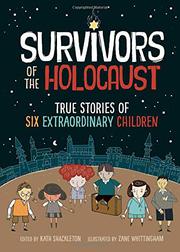 SURVIVORS OF THE HOLOCAUST

Each chapter of this graphic novel recounts the true experiences of a Jewish child who survived the Holocaust, and the stories, told by the survivors and edited by Shackleton, can be painful to read. Arek was nearly sent to a gas chamber at Birkenau and had to watch a girl being pulled away from her mother by the guards. But each chapter ends with the child living in a safe place. This is not to say that every chapter has a happy ending. One boy sees rockets exploding during an air raid. A girl named Suzanne finds shelter on a farm far out in the country and, ironically, doesn’t learn that the war has ended until two years after it’s over. But every segment concludes on a positive note, as in: “Suzanne was eventually rescued by the Red Cross and taken to live with her grandmother in…England.” This makes some sections of the book feel truncated, but readers may be grateful for the relief. Suzanne even ends up surrounded by farm animals in a truly lovely illustration. Whittingham’s character designs are inventive and, in their bleakest moments, resemble the animated sequences in Pink Floyd’s The Wall, which seems appropriate, since the book was inspired by animated films from the BBC.

Choppy storytelling doesn’t lessen the power or truth of the stories.