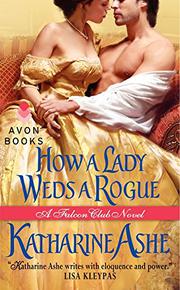 HOW A LADY WEDS A ROGUE

Convinced she’s destined for spinsterhood anyway, Regency heroine Diantha Lucas sets off on a journey certain to ruin her, and along the way, she finds her own true hero in a man on a course to destroy his own life, yet determined not to take her with him.

Diantha Lucas needs a hero, and she knows Wyn Yale is just what she’s looking for. He’s come to her rescue before, years ago when she was an ugly, tormented teen. So when she runs across him on a public coach, she’s certain it’s destiny and that he's meant to guide her on a journey she shouldn’t be taking at all, but especially not alone. Realizing that Diantha will continue on with or without him, Wyn joins her on the quest while sending secret messages to her family in an attempt to save her from herself. But as time passes and his messages go unanswered, Wyn finds himself more and more enamored of his companion. It’s an unwelcome passion, given that he’s on a path of vengeance that will likely find him hanged at the end of it. Unaware of her newfound beauty or the potency of her spirited, optimistic personality, Diantha misinterprets Wyn’s interest as simple male flirtation, chastising herself for her growing attachment to him, yet pursuing a deepening physical relationship. As circumstances become increasingly complicated, Wyn shelters Diantha in his Welsh childhood haven, and each character faces individual internal demons while overcoming physical danger and external threats together. Wyn knows he has nothing to offer Diantha. So why, for the first time in his life, does he feel like he’s finally met a woman who might actually be able to redeem him? The latest installment of Ashe’s Falcon Club series, this book is an emotionally touching and sexually taut romance that brings together two lonely hearts with no hope and finds them saving each other. The characters are textured, deep and believable. The writing is strong and lyrical, easily supporting agile, polished dialogue and a complex, well-paced plot. Fans of the series will recognize some cameo appearances.

With its jaded hero, effervescent heroine, an intriguing, engaging plot, and healthy doses of both humor and emotion, this is a delightful Regency jaunt.