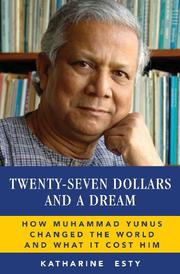 Twenty-Seven Dollars and a Dream

How Muhammad Yunus Changed the World and What It Cost Him

An admiring portrait of a charismatic economist and entrepreneur who found his calling as Bangladesh’s “banker to the poor.”

Bankers aren’t often thought of as heroes, but Muhammad Yunus comes across as one in this flattering biography. Esty (Workplace Diversity, 1997, etc.) traces the unlikely career of Yunus, who jointly won the 2006 Nobel Peace Prize with the Grameen Bank for battling poverty in his native Bangladesh. The “Twenty-Seven Dollars” in the book’s title refers to how Yunus stumbled onto his life mission in 1976 while a young college professor. He loaned $27 to a group of 42 villagers, allowing them to break free from the bonded labor that trapped many rural Bangladeshis. Yunus went on to found the Grameen Bank, specializing in microfinance—small, uncollateralized, easy-to-repay loans to poor residents, especially women. Esty chronicles the growth of the Grameen Bank, as well as Yunus’ later focus on “social businesses,” designed to address a social problem while making a profit. Microfinance as a policy tool has its critics, but Esty makes a compelling case that Yunus and his colleagues aided countless impoverished Bangladeshis while empowering women in a Muslim nation where they traditionally enjoyed few freedoms. Inspired by the author’s own interactions with Yunus, the fast-paced book holds lessons not only for social activists, but entrepreneurs as well. Yunus has founded more than 25 companies in industries ranging from telecommunications to renewable energy. Esty isn’t a detached biographer. She admits Yunus is her “hero” and that she aims to spread his story to a wider audience. As she sees it, Yunus is an iconoclastic visionary able to spur others to action yet ambitious enough to make powerful enemies. In 2011, he was ousted from the Grameen Bank in what the author believes was a politically motivated vendetta. Esty draws on her own background as a social psychologist and consultant to extract seven “patterns of action” she says underlie Yunus’ success. The result is a powerful template for any organization seeking to make a difference.

Relentless and inspiring, the life of Muhammad Yunus shows how capitalism and conscience need not be at odds.