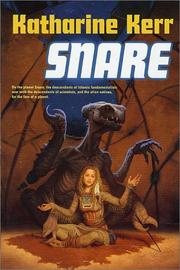 In this hefty tome, Kerr (The Shimmering Door, 1996) turns from Celtic-tinged fantasy to sweepingly far-future adventure on an alien world. The plot is built around Jezro Khan, the exiled brother of the corrupt ruler of Kazrajistan, an Islamic society. A former Kazrak cavalry officer named Warkannan and a “sorcerer” named Soutan, a native of the Cantons, where Jezro is in exile, lead an expedition to convince Jezro to overthrow the regime. At the same time, the Chosen (a fanatical Muslim sect whose members act as the ruler’s secret police) have sent an assassin, Zayn, to prevent Jezro’s return. To reach him, both groups must cross the grasslands, a wilderness inhabited by the alien Cha’Meech and by human nomads whose low-tech society centers on horses. Along the way, Zayn attaches himself to Ammadin, a woman who serves as Spirit Rider to a nomadic company headed into the Cantons; as a result of his experience with the nomads, he finds himself beginning to question his mission. Meanwhile, Soutan makes use of high-tech “magic” to become aware of Zayn’s mission, and Jezro’s followers make several attempts to kill the assassin. When Ammadin makes contact with a Cha’Meech woman who convinces her to meet her in the wilderness beyond the Cantons, representatives of all four main societies come into a conflict that’s eventually resolved by a literal deus ex machina who brings about a major reorganization of the planet’s complex political makeup. The various societies are interestingly contrasted, and the world-building is generally convincing if not especially original. While the plot sometimes moves slowly, Kerr keeps the reader guessing at the moral alignment of several major characters and provides a conclusion worth the convoluted path.

Solid SF adventure with a reasonable quota of interesting ideas for readers to chew on.