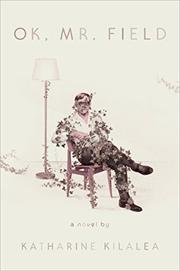 A concert pianist finds his life and mind drifting after an accident damages his hand in this gloomy, evocative novel.

Mr. Field is sleeping when the book starts. He is sleeping when a train crash shatters his left wrist. He is sleeping when his wife leaves him. The scant story he narrates alternates between stark reality and a dreamlike limbo, specifics and vagueness. With the compensation money he receives, he buys a white house, a box on stilts, that overlooks the sea on the Capetown coast of South Africa and was designed by an admirer of Le Corbusier. Mr. Field—no definite first name is given—meets the admirer’s widow, who lives nearby, and she soon haunts his waking life. He spends time peeping through her garden window. He often encounters a stray dog in a graveyard when he’s out walking. In the widow’s sitting room, a Chagall-like print shows a woman, a dog, and a rudimentary box of a house. Near Mr. Field’s house, a circular residential tower is being built. He wanders around his house, which is in a state of decay, as is Mr. Field. He is sad about his lost career and lost wife. His sadness wearies him: “I was so tired of being sad.” Maybe his wife found his sadness tiresome. Before she left, she played computer solitaire and studied the sea, writing observations in a notebook he later finds. Kilalea, who grew up in South Africa and whose previous book, One Eye’d Leigh, was a poetry collection that hasn't been published in the U.S., conjures from precise prose and elements as basic and fraught as Tarot card images—sea, widow, wife, round tower, box house, sad man—a kind of tone poem that seems at times forced but ultimately resonates well beyond one man’s depression.

An auspicious debut that challenges the reader to follow the progress of mental distress and bravely offers little relief from the painful sight.