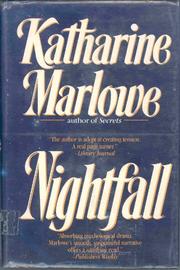 Mildly involving suspense in which a high-school teacher is harassed by an obsessed student, himself the victim of parental neglect and abuse. Marlowe is also the author of Secrets (1992) and Heart's Desire (1991). Rebecca, at 32, is settled into a comfortable house in suburban Connecticut and is dating Ray, a handsome, attentive—and married—type in insurance who lies through his teeth about his marital situation. Meanwhile, Ray's frantic wife is making life sheer hell for son Pete, nagging and hurling insults, and Pete—the teenager who had jumped defiantly in front of Rebecca's car one rainy night and is alternately high and low on whatever drugs he can get—becomes convinced that Rebecca is the cause of the breakup of his family. Before long, Pete homes in: Rebecca's flowers are destroyed, foul matter is delivered, and unbeknownst to her, he has found her crawl space. In the meantime, Rebecca is also worried about best friend Agnes, former actress and head of the English department, who's beginning to talk to a teddy bear and even lugs it to school. Somewhere along the line, as Rebecca's terror grows, a policeman (with degrees and a classy background, of course) takes an interest. Solutions all around are neat as a pin—with the victims compensated in one way or another, and the mean and crazies run to ground. Easy-going, moderate suspense.