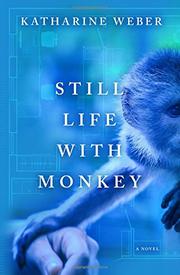 An architect and his wife grapple with the aftermath of a catastrophic accident in Weber’s sixth novel (True Confections, 2009, etc.).

Duncan is left with a spinal injury after his car is broadsided by an 18-wheeler on the way back from one of the custom homes for wealthy clients that are his firm’s bread and butter. Wheelchair-bound and with the use of only one weak hand, he sinks into a suicidal depression his wife, Laura, hopes will be alleviated by Ottoline, a “monkey helper” trained to perform simple manual tasks he once took for granted. Duncan does develop a bond with Ottoline, and Weber captures in amusing detail her charged interactions with Laura, viewed as a rival for their alpha male. Overall, however, the tone is dark; Duncan broods over Todd, the apprentice architect who died in the crash, and he remains angrily uncooperative with Laura’s attempts to construct a new normal in their changed lives. Weber elucidates both spouses’ struggles in a tough-minded narrative studded with the shrewd, not especially charitable observations that are her trademark. Twenty-five-year-old Todd is nailed with the comment, “As was true of so many of his generation, [he] thought he was entirely original in all of his gentleman hobo hipster choices”; a partner in Duncan’s firm is dismissed as “secretly convinced of his own superiority…he always looked as if he had just returned from a safari or an ice-climbing expedition.” There are also tender moments between Duncan and his "tentative, unambitious" twin, Gordon, and a poignant episode when Laura finds and frames the one truly original design Duncan completed in architecture school before settling for a career doing “highly adequate and entirely unremarkable work.” Missed chances, like the baby the couple failed to conceive, jostle painful acknowledgments of underappreciated pleasures now denied Duncan, like gardening and cooking. His catalog of everything he has lost and his belated acknowledgment of the burden Laura has also borne form the keening climax to this stark and compelling novel.

Rigorously unsentimental yet suffused with emotion: possibly the best work yet from an always stimulating writer.