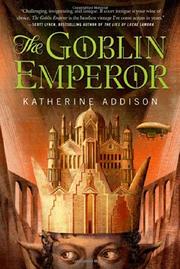 New fantasy from an author who, as Sarah Monette, wrote the Doctrine of Labyrinth series.

Eighteen-year-old half-goblin Maia, the despised youngest son of the Emperor, lives in wretched circumstances, exiled from the Imperial Court and overseen by his brutal cousin, Setheris. But then a courier arrives with the news that his father and elder brothers have been killed in an airship crash. Stunned and disconcerted, Maia must take his place as the rightful Emperor of the Elflands. Armed only with his quick wits, empathy and natural humility, his first task is to face down the arrogant and contemptuous Lord Chancellor, Uleris Chavar, and insist that he be crowned before his father's funeral. Alone and friendless, bewildered by the complex politics and economics of the court—and soon informed that his father’s death was caused by sabotage, not accident—Maia finds the burden almost unsupportable. He comes to rely on Csevet, the courier who becomes his secretary, for information and advice and on his guards Cala and Beshelar, who are sworn to protect him. Gradually he finds ways to solve intractable problems. He treats servants as people and women as equals, an approach that wins him many admirers but also enrages the more traditional nobles. Addison patiently and tellingly paints in the backdrop, mingling steampunk elements and low-key magic with imperial intricacies. There are powerful character studies and a plot full of small but deadly traps among which the sweet-natured, perplexed Maia must navigate. The result is a spellbinding and genuinely affecting drama.