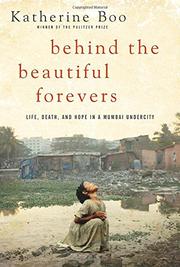 BEHIND THE BEAUTIFUL FOREVERS

Life, Death, and Hope in a Mumbai Undercity

Mumbai’s sparkling new airport and surrounding luxury hotels welcome visitors to the globalized, privatized, competitive India. Across the highway, on top of tons of garbage and next to a vast pool of sewage, lies the slum of Annawadi, one of many such places that house the millions of poor of Mumbai. For more than three years, Boo lived among and learned from the residents, observing their struggles and quarrels, listening to their dreams and despair, recording it all. She came away with a detailed portrait of individuals daring to aspire but too often denied a chance—their lives viewed as an embarrassment to the modernized wealthy. The author poignantly details these many lives: Abdul, a quiet buyer of recyclable trash who wished for nothing more than what he had; Zehrunisa, Abdul’s mother, a Muslim matriarch among hostile Hindu neighbors; Asha, the ambitious slum leader who used her connections and body in a vain attempt to escape from Annawadi; Manju, her beautiful, intelligent daughter whose hopes lay in the new India of opportunity; Sunil, the master scavenger, a little boy who would not grow; Meena, who drank rat poison rather than become a teenage bride in a remote village; Kalu, the charming garbage thief who was murdered and left by the side of the road. Boo brilliantly brings to life the residents of Annawadi, allowing the reader to know them and admire the fierce intelligence that allows them to survive in a world not made for them.

The best book yet written on India in the throes of a brutal transition.