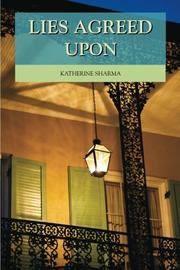 In Sharma’s debut mystery, an unexpected inheritance brings a young woman to New Orleans, where she confronts a tangled legacy of family secrets.

Tess Parnell receives a mysterious letter in the mail informing her of a surprise windfall. It couldn’t come at a better time; in the last six months, she lost her school librarian job, her boyfriend dumped her, and her mother committed suicide. The letter, from a New Orleans law firm, says that she’s inherited some land in that city; the firm also represents an oil company that wants to buy the land from her. Tess decides to travel from Los Angeles to New Orleans to check things out and evaluate the firm’s $500,000 offer. It also gives her the chance to investigate her family history, about which she knows almost nothing; a yellowed newspaper clipping included in the law firm’s packet, for example, informs her for the first time that her grandfather was murdered many years ago. As she tracks down further clues, she meets several exciting and varied men while also enjoying New Orleans’ food, music, sights and unique atmosphere. Every step closer to the truth, however, brings her that much closer to danger. Sharma portrays New Orleans as beautiful, corrupt, complicated, secretive and tragic—far more than just an atmospheric backdrop for Tess’ genealogical investigations. She skillfully shows how the family betrayals, murders, lies and vengeance Tess uncovers are inextricably linked with New Orleans’ history, racial and sexual politics, and geography. The author handles dialogue (and dialect) well, which gives vitality to her large, varied cast, and she depicts Tess herself as likable, enterprising and sympathetic. However, the complicated family relationships, dating back several generations, may be hard for some readers to follow, and the frequent genealogical discussions become oppressive at times, even with the chart provided (which is difficult to read on an e-reader). At such points, the action sometimes bogs down, and more charts might have been helpful to illustrate some of the tangled relationships. That said, Sharma paces the novel well, gradually unfolding layers of mystery until the final truth is revealed.