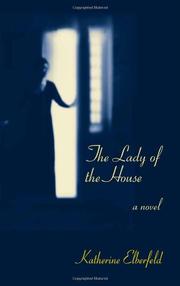 THE LADY OF THE HOUSE

In Elberfeld’s debut novel, a newly widowed, 50-ish woman looks back at significant moments in her life, reflected through the prism of memory and dream.

As this pared-down novel begins, Annie, 52, has just returned from her husband Pearce’s funeral, facing an empty apartment and her memories. Disjointed thoughts of the past keep arising—not of Pearce, but of Danny, the boy she first loved. If she can get these thoughts “to click into place, they would reveal their secret to her….Why, why had she left Danny behind?” Through reverie and dreams, Annie pieces together the significant moments of her childhood: first meeting Danny, her mean-spirited grandmother, her mother’s early death, Danny’s proposal and why she turned him down. Through this process, Annie finds the strength she needs within herself. In her debut, Elberfeld confers a sense of ominous significance to small events, as memories often turn to dreams or nightmares. A dutiful childhood visit to an old lady in her stuffy parlor, for example, slides into a bad dream: “And the door on the parakeet cage clanged shut and Annie was in the cage and the bird smell and the old-lady smell filled her nostrils like powder and her windpipe closed in.” In evocative, poetic language, Elberfeld captures the evanescence of youth: “[P]ressed between Danny’s body and the body of his truck, Annie stood in the moonless night with the crickets zigzagging in her ears and heart and drank as if she stood at the fountain of life.” Annie’s story is, however, rather slight to bear all the weight of this significance. Her husband was dear and sweet; if he valued security over excitement, how could he live up to her memory of Danny, unchallenged by any of the real cares of adulthood? And while Annie remains convinced that the central issue was her lack of faith in Danny, it’s her inability to stand up for herself that’s most prominent.

A lyrical exploration of memory, grief and choice.