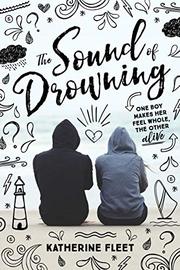 THE SOUND OF DROWNING

Once, 17-year-old Meredith “Mer” Hall loved the ocean, indie music, and especially Ben Collins, her lifelong best friend–turned-boyfriend. Now she fears the sea, resents any human connection, and especially loathes herself for the way she ruined things. Still, even after hurting him so badly, she treasures the few secret hours she can snatch with Ben; so when new boy Wyatt Quinn—handsome, cocky, barely hiding his own pain—starts to get close, Mer’s afraid of risking her fragile stability. Alternating between flashbacks of her slowly developing relationship with Ben and her current efforts to cope with her crumbling life, Mer’s spiky, acerbic narration cannot conceal the agonizing undercurrents of insecurity, grief, and despair. The lushly described setting in North Carolina’s Outer Banks echoes her interior landscape: bleak, desolate, and subtly off-kilter. The twisty narrative avoids problem-novel territory, instead engaging with and exploring the underlying issues surrounding trust, autonomy, teenage sexuality, and depression frankly and nonjudgmentally, with more emphasis on emotional ramifications than graphic details. Secondary characters (like the protagonists, apparently all default to white) are loving and mean well but are hobbled by their own flaws and mistakes. Some readers might find the big reveal a bit over-the-top, but with Mer’s final choice—both unexpected and oh-so-right—a final dollop of magical realism provides a sweetly hopeful conclusion.