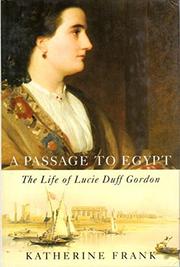 A PASSAGE TO EGYPT

The Life of Lucie Duff Gordon

This absorbing account follows a remarkable 19th-century Englishwoman from her London childhood to her final years in Upper Egypt, where she shed many of her European trappings to become Noor ala Noor (Light from the Light), author and healer. With few playmates her own age, Lucie Austin's earliest friends included ``Bun Don'' (``Brother'' John Stuart Mill, then a teenager) and Jeremy Bentham, an adult in whose garden she played, avoiding the panopticon prison laid out on the flower beds. Her well-educated mother, Sarah, translated a travelogue and other works from German to help support a husband whose health was chronically fragile and whose career was a chronic failure. When Lucie, who as a youth unsettled acquaintances with a pet snake tucked into her sleeve or hair, married Sir Alexander Duff Gordon, she became, as Frank (A Chainless Soul: A Life of Emily Brontâ, 1990) notes, ``a delightful, albeit rather Bohemian hostess'' whose guests included Dickens and Thackeray. Alexander's career at the Treasury failed to advance, so Lucie, like Sarah, took up translation to supplement her family's modest income. In late 1859, Lucie was confronted with a new problem, tuberculosis, and by 1861 was warned she would not survive another English winter. After a trip to southern Africa, she returned to England and was again warned to go abroad. Leaving behind her husband and children, she set out for Egypt; there she spent most of the rest of her life and wrote Letters from Egypt, which made her an unwilling celebrity with European tourists. Unlike the typical English expatriate of her time, she shunned English communities, becoming devoted to the Arabs who surrounded her and to the country she called ``a palimpsest in which the Bible is written over Herodotus and the Koran over that.'' A memorable story that will challenge images of the 19th century as a sepia-toned world inhabited by static women.