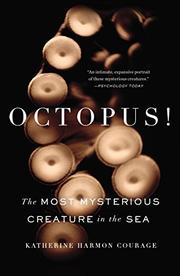 The Most Mysterious Creature in the Sea

Scientific American associate editor Courage explains why the octopus has been beguiling humans for millennia, making an appearance in “creation myths, art, and, of course, cuisine.”

A gourmet treat in Mediterranean countries and found in abundance in oceans throughout the world, octopus is a high-protein, low-fat food. A relative of the squid, it is a biological anomaly with three hearts, eight arms and the intelligence to open childproof bottles and solve simple mazes. It is estimated that the octopus has been around nearly 300 million years, predating the dinosaur. Courage chronicles her travels tracking them—e.g., braving rough Spanish seas on a small fishing boat to witness how they are caught and then sampling the local specialty: “a dish of soft-boiled octopus sprinkled with paprika, sea salt, and olive oil.” However, the author focuses primarily on their ecological niche. Both predators and prey, octopuses and eels have wrestling bouts to determine who eats whom. As potential prey for barracuda, sharks, sea otters and more, octopuses have developed elaborate defenses. When threatened, they shoot out an irritating burst of black, inky liquid that acts as a shield. Octopuses ordinarily mate only once, in the first two years of their lives, and then die within months. Each female hatches thousands of eggs, most of which perish. Those that survive live solitary lives until they mate. The octopus is thought to be color blind in the ordinary sense of the word, but it has an amazing ability to rapidly camouflage its skin,“ allowing it to blend seamlessly into the background in color, brightness, and even texture and movement…in about three-tenths of a second.” Their skin appears to be capable of perception, directly detecting and responding to the color and polarization of light.

A pleasant, chatty book on a fascinating subject.