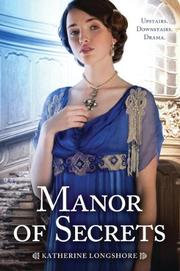 Upstairs, Lady Charlotte pines for a more adventurous, purposeful life, while downstairs, kitchen maid Janie doesn’t allow herself to consider any possibilities other than servitude.

The Manor is home to the Edmondses and all of the servants they require. Charlotte, age 16, understands that her mother, the icy Lady Diane wants her to marry dull Lord Andrew, but it’s a handsome footman who catches her eye and kisses her. She also forges a friendship with maid Janie, drawn to her adventurousness as well as her practical skills, though the admiration is not mutual. Alternating chapters reflect the two girls’ perspectives. The arrival of Charlotte’s cosmopolitan aunt, the Lady Beatrice, creates new questions in Charlotte’s mind about societal expectations and also about the mysterious coolness between Beatrice and Diane. References to corsets, airplanes, Worth gowns and “suffragettes” place the tale around 1910, as Old World values were beginning to shift. Longshore works in interesting details about period food and clothing, but characters’ speech and behavior often seem off, as, for instance, when servants riff on Shakespeare and the oh-so-proper Lady Diane refers to a “shiner.” The choppy prose style relies heavily on sentence fragments: “This was a test. Of her fortitude. But also of her ability to disregard the wall that separated mistress from servant.”

Pitched for Downton Abbey fans but lacking both the style and the accuracy.