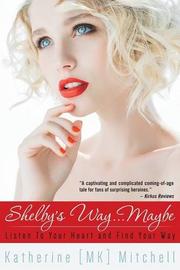 Listen to Your Heart and Find Your Way

A novel follows a young mother who is forced to grow up when her husband abruptly abandons her.

Young, beautiful, and sheltered Shelby Carpenter is married to a successful Hollywood stuntman. The book opens as Shelby and her husband, Boyd, mingle with other Tinseltown hotshots at a lavish party in Los Angeles. An attractive and assertive divorcée offers to take Boyd on a tour of the grounds, whereupon he excuses himself from the company of his wife, never to be seen again. Shelby cannot believe that she has been left so suddenly and brazenly by her husband of more than half a decade, but after three long days with no word from Boyd, she begins to accept the truth. She is soon informed by mutual acquaintances that Boyd went to Kenya with his new girlfriend, and before she knows it, she has received divorce papers from his attorney. With no job and very little life experience, Shelby is left to fend for herself and her 8-year-old daughter, Pamela, on her own. Motivated by the responsibility she feels for her daughter, Shelby finds positions as a cocktail waitress and an administrative assistant in a corporate office. As she learns to stand on her own, Shelby meets three men who appeal to different aspects of her personality. Each of the three provides Shelby with emotional support during her most turbulent times as well as varying levels of distraction and sexual fulfillment. Formerly writing under the name MK Landstein, Mitchell (Wasted…Maybe, 2013, etc.) delivers a complex heroine. As the appealing story progresses, Shelby’s feelings for each of the three suitors evolve, along with her sentiments about herself. Throughout the novel, the author provides insightful and compassionate details about the difficulties of single motherhood (“All along she knew she would not allow anything to interfere with Pamela’s world, her self-image and security. Shelby knew she would have to climb out of this hole step by step”). Mitchell also shows how Shelby’s lovely face and friendly demeanor can often function as more of a curse than a blessing. There are many intricate subplots that weave their ways throughout the larger story, rounding out the richness of the narrative.

A captivating and complicated coming-of-age tale for fans of surprising heroines.