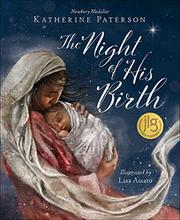 THE NIGHT OF HIS BIRTH

A lyrical, moving account of Jesus’ birth, from his mother’s perspective.

In text adapted from a story that first appeared in The Presbyterian Survey (1985), Paterson channels the voice of the Virgin Mary, who marvels at the birth of her son after the shepherds have departed and while Joseph sleeps: “Can you believe it? God’s anointed one upon my breast, with milk, just there, at the corner of his tiny mouth.” These down-to-earth, oh-so-human words are accompanied by a picture of the Madonna and Child, her face turned away as she sits, barefoot, cradling him, while he faces readers. Both have dark hair and olive complexions, as do others depicted in the stunning, full-color illustrations. Prominent, aquiline noses define many profiles, and the characters’ brown eyes radiate wonder and reverence throughout the book. Nowhere is this more apparent than in a spread with an extreme close-up of Mary’s eyes gazing at readers from a full-bleed double-page spread with text that wonders about what the future holds for her baby and herself. Earlier, her parents gazed outward, too, as Mary recalled their worry about her pregnancy before also addressing Joseph’s concerns. But “tonight, I saw the gentle way he washed the son God gave into his care,” Mary later reflects in another moment emphasizing the humanity of this holy night.