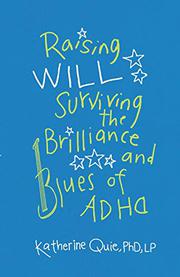 A child psychologist recounts the difficulties of raising a son with attention deficit hyperactivity disorder in this memoir.

Early in Quie’s (co-author: You Might Be Raising an A**hole If…, 2018) book, she discusses the rocky months surrounding her son William’s birth, describing a nurse’s accidentally breaking her water, her infant son’s inability to properly nurse, and the onset of postpartum depression. Even as a toddler, the author recalls, William showed abnormal behavior, including nonstop energy and a refusal to eat anything that didn’t look absolutely flawless, as though it was “molded in a wax museum.” When William was 4, the author and her husband adopted a 14-month-old girl from China; the baby had severe attachment issues, which further drained the author’s emotional energy. After William began attending school, Quie saw that he required professional help that she couldn’t give. She describes her frustration with William’s inability to focus enough to tie his shoes, to follow directions of more than one step, and to learn to write. Even after he was diagnosed with ADHD, Quie clung to her belief that her education in child psychology, and her and her husband’s dedication to parenting, would be enough to help William thrive. For years, she grew angry with William’s teachers who refused to acknowledge the difficulties that children with ADHD can face. Eventually, William was prescribed Adderall and, over time, the family developed routines to help William make it through each day. Quie’s yearning to help her son will be keenly relatable for many, and over the course of the book, she strikes an appealing tone of compassion. She also punctuates the text with well-timed moments of humor: “my mind had a heyday casting spells on Dr. Morris. A flat tire on his way home from work, a vicious complaint to the medical board, a grandchild who only ate Pop-Tarts.” The author also mixes in diagnostic terminology in a natural way, such as explanations of ADHD subtypes and stimulants used for treatment. Readers who are close to children who may be struggling with ADHD will find solace in Quie’s story.

BORN ON A BLUE DAY
by Daniel Tammet
Nonfiction