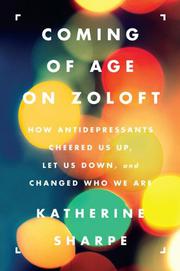 COMING OF AGE ON ZOLOFT

How Antidepressants Cheered Us Up, Let Us Down, and Changed Who We Are

After a 20-minute session with a counselor during college, former scienceblogs.com editor Sharpe was prescribed Zoloft, and for most of the next 10 years she continued on antidepressants. That experience was not unusual in her generation, nor is it among young people today. The author questions the effect of such medication on adolescents who have not yet fully developed a sense of self. Antidepressants, she writes, got her moving, but they failed to give her the sense of direction that talk therapy later provided; she deplores the decline in access to talk therapy, a powerful complement to drug therapy. Sharpe interviewed or corresponded with dozens of other people about their experiences growing up on antidepressants, and their stories reveal a range of reactions. For some, the judgment that they had a chemical imbalance in the brain came as a relief, freeing them from a feeling of blame; for others, it made them feel like freaks. Besides her personal story and those of her interviewees, Sharpe provides a history of antidepressants, a revealing look at the politics behind the evolution of the Diagnostic and Statistical Manual of Mental Disorders and an account of the rise of the biomedical model of mental illness, which holds that disorders like depression have biological causes and can be managed with pharmaceuticals. She also analyzes the effects of direct-to-consumer advertising by drug companies on the demand for antidepressants and the role of health insurance in determining patients’ access to therapy modalities. Balanced and informative—an education for any parent considering psychiatric medication for a troubled adolescent.