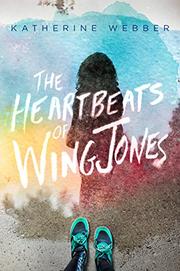 THE HEARTBEATS OF WING JONES

In 1995 Atlanta, a mixed-race girl finds a way to stand out on her own terms.

Wing and her brother, Marcus, attract attention because they're half Chinese, half black. While Marcus is a football hero, Wing suffers bullying from a mean girl and secretly pines for Aaron, Marcus' best friend, a black boy. Everything changes when Marcus, while driving drunk, kills two people and falls into a coma. Wing feels completely alone; neither her mother nor her grandmothers, LaoLao and Granny Dee, seem to know what to do. So Wing starts running in secret, prodded by her imaginary dragon and lioness, which she has not seen since her father died. She feels free when she runs, as though she can outrun all her mixed emotions. When Aaron finds out, he encourages Wing, and they grow closer even as the situation at home worsens. A running sponsorship could save her family—but in trying to chase that sponsorship, will Wing lose the one thing that makes her feel free? The choice of time period feels unjustified—this story could have been equally true in 2016—and the device of the dragon and lioness feels forced. Nevertheless, Wing's sense of isolation is well-captured, and her grief and confusion are raw and moving.