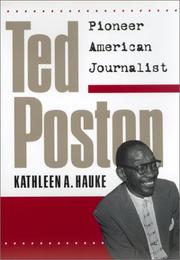 by Kathleen A. Hauke

Reading Ted Poston’s life story is akin to reading several small chapters in American history. Poston, the first black to integrate an all-white daily newspaper—the then respectably liberal New York Post in 1935—was a glib, street-smart raconteur, fond of women and fonder still of alcoholic beverages, a man equally comfortable chatting with Harlem street folk and conducting policy discussions in President Franklin Roosevelt’s “Black Cabinet,”of which he was an active member. In a career that spanned more than 40 years, some of the highlights included coverage of the Scottsboro Boys trial (nine young black men were charged with raping two white women); the school desegregation case leading to the landmark 1954 US Supreme Court decision in Brown vs. the Board of Education; the Emmett Till lynching trial; and former governor George Wallace’s famous stand inside an Alabama school door as he attempted to block blacks from entering. Poston died in 1974. But while he lived, he enjoyed first-name-basis relationships with all the major civil rights figures. Later, he served as elder statesman and tutor to many young black journalists. Independent scholar Hauke has spent a decade piecing together Poston’s life from archives, oral histories, and interviews; she offers a marvelous blend of the historical and the anecdotal. In her view, Poston was an enormously complex man whose quick wit and acerbic humor often disguised an embittered soul. He drank and smoked too much, married three times, and kept several women on the side. But nowhere does Hauke say or suggest that Poston ever pitied himself or whined about his lot as an African-American. A gem of a book on a remarkable person—and his age. (24 b&w photos, not seen)