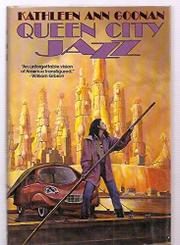 In Goonan's medium-future world, space radiation prevents all broadcast communications, so communities are isolated. The wholesale application of nanotechnology, or ``nan,'' has led to dreadful wars, plagues, and a population crash. Young Verity, one of a small community of Shakers subsisting near deserted Dayton, Ohio, finds she has the ability to talk with the still extant, computerized Dayton library. She learns of the existence of the Queen City, Cincinnati, which is ``Enlivened,'' constructed and run by nan, governed by a hive mentality composed of huge genetically tailored Bees and Flowers that have become trapped in a hormonal feedback loop. After various adventures, and aided by her musician friend, Sphere, Verity enters Cincinnati and learns that she is only the latest of a series of clones programmed by one of the Enlivened city's vanished architects. Her function is to help the city out of its mindless, seasonal cycle of creation and destruction. So Verity must join the city's hormonal-informational network and become the queen Bee—a transformation that the city's mad creator is determined to prevent. Fuzzy, overlong, often poorly controlled, but flavorsome and wonderfully inventive, the centerpiece being Goonan's dazzling vision of new technology run riot. An exceptionally promising debut novel.