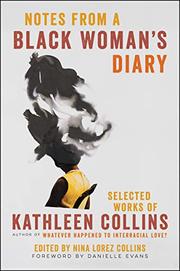 NOTES FROM A BLACK WOMAN'S DIARY

A multigenre collection of Collins’ (Whatever Happened to Interracial Love?, 2016) previously unpublished writing—fiction, letters, diary entries, plays, and screenplays—collected here and edited by her daughter, 30 years after the author’s death.

“The greatest marvel of Collins’s writing is that she is a magician in her use of interiority,” writes Danielle Evans (Before You Suffocate Your Own Fool Self, 2010) in the collection’s introduction. “She can just slip underneath a moment of tension barely noticed by those in the world of the story and give us a character’s entire interior life, but she is also a master of the moments when…all pretense drops away and the unsayable is given words and said out loud.” It is, as the works here quickly demonstrate, a mastery that transcends form. The book opens with a trio of short stories, each of them centered around a woman as she is observed, followed by an excerpt from an unfinished novel, Lollie: A Suburban Tale, in which a bohemian husband and wife fight for narrative control of their marriage. It's a fight that ends prematurely; the immediate tragedy is the excerpt cuts off. The fragments from Collins’ actual life—first the diary entries and then the letters—are as arrestingly clear as the fiction, small and expansive at once. Dated Sept. 9: “They’re selling an old medieval house on Mason’s Road, where the rooms go on endlessly, like a labyrinth. We went there on Saturday and bought five red chairs for the kitchen." And reflecting on life on an April 11: “Instead of dealing with race I went in search of love…and what I found was a very hungry colored lady.” The bulk of the work here, though, are the scripts, one for her 1982 feature film, Losing Ground—a “comedy drama” about a philosophy professor who finds herself starring in a student film that hews unsettlingly close to her real life—and one for the stage play The Brothers, the story of a striving middle-class black family, told by its grieving women.

Reading Collins work the same themes over again and again across mediums is a rare pleasure—as close as most of us will ever come to her spectacular mind.