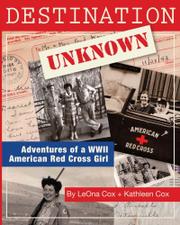 Away from the smoke and the bullets but close enough to the colorful characters, a plucky Red Cross girl tells of her place in World War II’s Mediterranean Theater.

Wars are also fought from behind the front lines. This tale shows one woman and her Red Cross colleagues turning a small wheel in the massive American war machine of 1943. Debut author Kathleen Cox turns wartime letters and snapshots from her mother, LeOna, into a readable, often charming path from rural Minnesota to East Coast training and to following in the footsteps of the U.S. Army in North Africa, eventually onward to occupied Italy. Endearingly, the story lacks any pretense to bigness. At each stop, the elder Cox’s job was serving coffee, manufacturing pastimes for GIs, rooting out local embezzlers and, through it all, assuring her Minnesota parents that her adventures carried not even a whiff of danger. She hears of the Normandy landings through news reports, probably no sooner than her stateside friends; even a drive past Cassino, site of some of the heaviest fighting in the Italian campaign, comes a month after the Germans had been driven out. The named and nameless soldiers bask in simple things: talking to an American girl, swimming in a pool and treating the local children to ice cream. LeOna’s Red Cross service and her romance both show the power of the social economy among the troops and their supporters. Knowing the right people or simply charming the right enlisted men could get you a car or even an upgraded room at a seaside palace. The heart of the book, and an understandable focus for the younger Cox, is the story of LeOna’s romance with John Cox—a courtship that included drives through the Atlas Mountains, some innocent stowing away on a B-24 and (as Leona tells it) a small bargain with Pope Pius XII.

A fresh, rarely seen perspective on life during wartime.