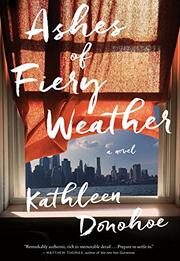 Four generations of women tied to Irish-American firefighters in Brooklyn move through this sprawling debut as it renders a family and community held together by the threat of sudden loss and the burdens of new lives.

From the death and diaspora sparked by Ireland’s 1845 famine to the hundreds of firefighters killed on 9/11, Donohoe tells the story of seven women linked to the Keegan-O’Reilly clan in as many large sections. The cast includes about 20 main characters, and while a prefatory family tree helps, confusion can arise. The big chunks aren’t in chronological order, and time shifts often within them under small-font subheads that are easily overlooked. The men are generally at the firehouse, working a second job, or in a bar. That leaves the central seven women and a narrative thread of personal or family crises, small and large, unspooling episodically like a rosary moving bead by bead through praying fingers. The major theme that sustains many loosely connected moments is that of missing persons. To take one example, before adopting a child, Delia consults with her Jewish friend Nathaniel, whose parents were forced to leave a sickly child behind in Poland before fleeing the Nazis. Nathaniel will spend most of his life searching for this lost brother. Delia will adopt Eileen, whose unwed mother in conservative 1950s Ireland must give her up, and Eileen will spend years wondering about her birth mother. A line also runs from Delia’s son, Sean, to another girl curious about the unwed mother in liberal 1990s Brooklyn who agreed to have her baby adopted. The theme culminates of course with 9/11, and Donohoe brings a fresh eye to the catastrophe as it batters her characters and elevates her generally unspectacular prose.

This is dangerously fertile ground for stereotypes and clichés, both of which Donohoe largely avoids in a sympathetic tale full of well-shaped vignettes.