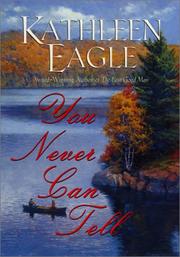 YOU NEVER CAN TELL

RITA Award–winner Eagle once again tries for a mainstream audience, this time in a story that centers on a journalist, Manhattan-based, who falls in love with a Lakota Sioux activist and his cause.

Heather Reardon describes herself as having “made quite a name for myself writing stories that speak to the American social conscience.” In northern Minnesota, she tracks down her idol, an American Indian Movement activist and prison escapee named Kole Kills Crow. Jailed for taking hostages at a post office, a bogus charge, Kole was framed for the killing of a fellow prisoner. Then, while he was living in supposed hiding, his wife was killed in a mysterious house explosion. Heather knows the whole story because her best friend Savannah, the supermodel heroine of Eagle’s last title (The Last Good Man, 2000) and coincidently Kole’s sister-in-law, has been raising Kole’s daughter in order to keep her safe. Not surprisingly, the attraction between Kole and Heather is immediate. But should Kole trust this stranger? And should Heather sleep with her story? After clever if facile banter, soft-focus eroticism, and far too much political discussion of Native American rights and governmental wrongs, the affair takes off as the two start a trek cross-country to Hollywood to demonstrate against film stereotypes and incidentally to clear Kole of the murder charge by finding the real perp. The story, in all, never quite jells. While some details, like the obvious alias “Kola” under which Kole successfully hides from the law, create minor implausibility, others, like a nuclear waste company’s involvement in filmmaking and murder, are just heavy-handed. In Eagle’s black-and-white world, all Indians are noble and wise, even a former activist turned passive traitor who gets his act of redemption in the novel’s one, slightly out-of-place scene of unexpected violence.

Eagle, a veteran romancer, knows her Indian facts and history, but her characters fail to bring either to life.