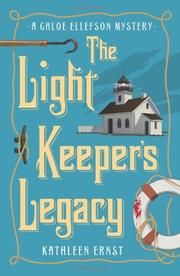 A curator is happy to be loaned out to investigate an old lighthouse, until her trip turns from a treat into a nightmare.

Chloe Ellefson is not on the best terms with her boss at Old World Wisconsin. So, a trip to an uninhabited island to do research on a lighthouse that’s under restoration sounds like fun despite the misgivings of Roelke McKenna, her police officer boyfriend. Chloe arrives without incident on Rock Island, which has been designated a state park despite the efforts of developers. She meets park manager Garrett Smith. She settles in at Pottawatomie Lighthouse. But her peace is shattered when she goes to the beach and discovers the body of a dead woman. The unknown girl is far from the first victim of the dangerous waters of Lake Michigan. In addition, Chloe quickly learns that there’s always been tension between commercial and sport fishermen and the authorities who must enforce the ever-changing rules. She becomes intrigued with the life and times of Emily Betts, assistant keeper to her husband, William, in the 1870s. Chloe has the unwelcome gift of exceptional sensitivity to things in the past, and she has bad feelings about an area of the island, formerly a fishing village, that an archaeologist is now exploring. The story cuts back and forth between the troubles and privations of the early settlers and the present day, where a murderer lurks. It falls to Chloe to marry past and present and find a killer who can’t stop at just one.

Chloe’s third (The Heirloom Murders, 2011, etc.) combines a good mystery with some interesting historical information on a niche subject.