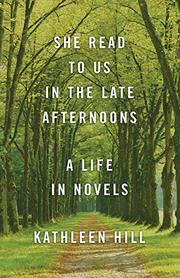 SHE READ TO US IN THE LATE AFTERNOONS

A Life in Novels

A distinguished fiction writer traces the relationship between significant periods in her life and the novels she was reading during those defining times.

From the time she was a child, Hill (MFA Program/Sarah Lawrence Coll. Who Occupies This House, 2010, etc.) had a sense that events unfolding around her were “inside a story.” The first time she experienced the way life and art mirrored each other was in a seventh-grade music class. Around the time her teacher told students about the accident that ended her career as a concert pianist, Hill immersed herself in Willa Cather’s Lucy Gayheart. The heroine's accidental drowning prepared the author for the death of a friend’s father, who committed suicide by jumping into the town reservoir. When she was 23, she traveled to Nigeria with her husband to teach. There, she encountered Things Fall Apart and learned about Nigeria’s racist colonial history, all without fully realizing how deeply implicated her own “right-thinking” country was in that brutal past. Reading A Portrait of a Lady cast her own innocence, both about colonial Africa and her own rushed union with her husband, into uncomfortable relief: like slavery, “marriage involved...the desire…to bend another’s will to the requirements of one’s own.” On a later trip to France, the author was drawn to Madame Bovary and the female protagonist who believed that reality “hover[ed] just beyond reach”; and then to Diary of a Country Priest, which offered her insight into how she had been looking at the people around her “through the lens of fear” rather than love. But it would be À la Recherche du Temps Perdu, which she read many years later to a nearly blind Diana Trilling, that would cause her to think more deeply about the mysteries of life. Eloquent and searching, Hill’s book explores the strange and wondrous resonances between the read and lived while celebrating reading itself as among the most profoundly transformative of human acts.

A thought-provoking memoir about the significance of literature in life.