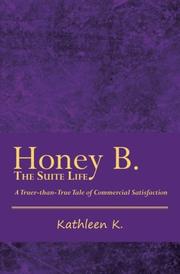 HONEY B., THE SUITE LIFE

From K. (Stainless Mary: O Come, All Ye Faithful, 2012, etc.), an educational, arousing read about a woman who could be paid to do almost anything—and like it.

Call-girl Honey B. has found her destiny in life: to make others feel good by fulfilling their desires without sacrificing her own. She enjoys what she does, she’s good at it, and she’s endowed with the presence and demeanor that allow her to be successful and discreet in her field (she doesn’t stand on the corner but depends on referrals and chance meetings). The no-nonsense, just-the-facts narrative shows that Honey B. is just as hardworking and sympathetic as anyone suffering through a desk job to pay the bills. In fact, the desk jockey’s would probably be indistinguishable from Honey’s, who notes, “If people-who-paid-for-sexotic-situations gathered in one room you couldn’t tell if it were a shareholders meeting, an audition for Hamlet or a random survey sampling.” The only difference is, her job involves experimenting with sex toys, trying new positions, coaching others in bed and helping her clients reach new heights of sexual euphoria, and it often brings her as much bliss as it does them. Graphic sex scenes and language may titillate, but the unadorned language can distance readers from the scenes, even during the play-by-plays, and instead merely inspire curiosity about some of the darker, more secretive corners of sexual experimentation. It’s far from the average porn that throws the reader’s mind directly into the action, but it does offer a variety—bondage, orgies, etc.—to explore. The novel may not send readers’ minds into a state of frenzy and keep them there, but it offers a competent, novelized version of hard-core erotica.

Honey B. may inspire the plain Jane or average Joe to spice things up—or just learn something new.