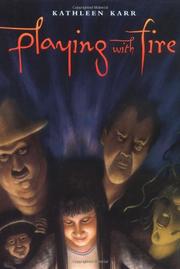 Supposedly rigged séances summon a genuine Presence through the Infernal Gates in this deliciously melodramatic page-turner, set in the Roaring ’20s. Swept from their tenement room to the Long Island mansion of a wealthy Theosophist by domineering con-man Drake Morley, latest in a line of "uncles," 14-year-old Greer Duquesne and her mother, the beautiful, otherworldly fortuneteller Madame Camille, find themselves in a specially prepared room, holding hands with moneyed guests seeking contact with the Beyond—or at least an evening's amusement. Madame Camille has the right patter and a genuine sense of empathy, but it's Greer who can actually see people's auras, and whose psychic powers suddenly have her mother roaring out harsh revelations in the voice of a spirit named Merlin. With the séances beginning to bring in serious amounts of money, Greer's ambition to lead a normal, settled life looks to go glimmering, unless she can find a way to escape Drake's clutches. Karr (The Boxer, 2000, etc.) builds suspense with fine expertise, leading to a lurid climactic session that brings together Merlin, a wild storm, a power failure, a well-armed band of bootleggers, and some ugly news about Drake's past that pitches him past the brink of insanity. Readers will admire Greer for the plucky way she stands up to her mother's menacing impresario, and though the wrap-up seems too quick, the prospect of a sunnier future for Greer and her mother ends the tale on a satisfyingly rising note. (Fiction. 11-13)