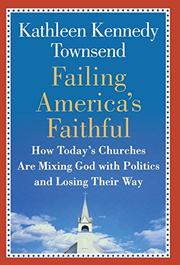 “Instead of emphasizing the fact that we are all children of God, faith in America now divides communities.” So charges Townsend, daughter of Robert Kennedy, who offers a faith-based platform for liberals.

The right gets religion wrong, and the left doesn’t get it at all, theologian Jim Wallis has observed. Townsend is proof to the contrary, a committed Catholic who despairs of the Church’s political leanings and who counters with an ethic of service to the poor and powerless. In a neat but too-brief analysis, she contrasts her father’s vision with that of Ronald Reagan, and by extension the liberal and conservative views of human nature. Asked by David Frost what people are put on earth for, RFK replied, “If you’ve made some contribution to someone else, to improve their life, and make their life a little more livable, a little more happy, I think that’s what you should be doing.” Reagan, by contrast, argued, “Each man must find his own salvation . . . every man to be what God intended him to be.” Townsend dismisses the latter view as justification for “an entire multimillion-dollar industry that treats God as little more than a self-help guru who helps you be all you can be,” and the notion of compassionate conservatism as “just another way to put the wolf in sheep’s clothing.” There is an appropriate role for religion and the religious in politics, Townsend argues, one that reconciles the liberating vision of the Founding Fathers with values born of faith, such as those contained in Pope Leo XIII’s encyclical Rerum Novarum; the public, she reckons, is ready for just such a hybrid, even as rightist clergy and politicians have insisted that it’s a war of each against all out there, undermining “the sense of national unity and collective responsibility that has mattered so much throughout American history.”

Watch for elements of Townsend’s well-framed argument at the 2008 Democratic Convention.