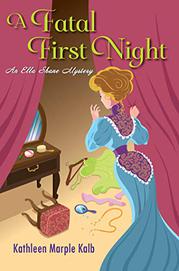 Ella Shane, an Irish Jewish New Yorker well known for her success in male roles, is appearing as Edward V in the brilliant new opera The Princes in the Tower. Although women don’t have much freedom in 1899, Ella is determined to keep hers even if her determination endangers her romance with Gilbert Saint Aubyn, Duke of Leith, with whom sparks have flown ever since they met while solving the murder of his cousin. Within the opera company, which is run by several of Ella’s friends and relatives from the Lower East Side, her cousin Tommy is especially protective of her reputation. When Albert Reuter, the singer playing Richard III, is arrested for murder, Detective Riley, another of Ella’s cousins, catches the case. No matter what, of course, the show must go on. Gil’s sudden appearance in New York on mysterious business gives Ella much to discuss with her best friend, newspaper reporter Hetty MacNaughten, who’s covering the sensational murder trial of Amelie Van Vleet. While Gil goes about his business, Ella considers the costs of marriage for an independent woman who wants to continue her career. Gil finds a way to prove Albert innocent, but the trouble still haunting the theater forces Ella and Gil to play detective again.

Romance, engaging characters, and a timely exploration of marriage and freedom make up for the meager mystery.