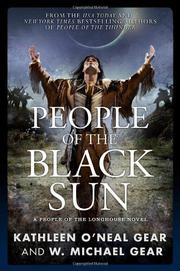 PEOPLE OF THE BLACK SUN

The conclusion of the four-novel People of the Longhouse saga, part of the Gears’ long-running series of novels featuring ancient Native American peoples.

The Gears (The Broken Land, 2012, etc.), both archaeologists, once again show the depth of their research in their adventure series, suffusing the narrative with details of the prehistory Iroquois people in an area that now encompasses parts of New York, Vermont, New Hampshire and Ontario. In this installment, they finish their story of Dekanawida the Peacemaker, which began with 2010’s People of the Longhouse. Dekanawida—formerly known as the warrior Odion, also known as the Sky Messenger—is a prophet who has helped to unite four of five nations in a peaceful alliance. Dekanawida has had a powerful vision that the end of the world will result if peace is not achieved among all of the nations. But one leader, the brutal Atotarho, continues to wage war throughout the lands. The Gears’ tale is vast and sweeping, with a large cast of characters and the very fate of the world at stake. Readers interested in Native American legends will find much to enjoy here, as the Gears show their great knowledge of and affection for their subject matter. The novel works well as an epic adventure, and its fight scenes are particularly effective, though the overall pace of the plot may be a bit slow for some readers. As with many series, it may also be difficult to follow without having read its predecessors. That said, the novel will please the Gears’ fans, and may broadly appeal to readers who enjoy other complex fantasy tales.

A well-crafted chapter in the Gears’ ongoing series.