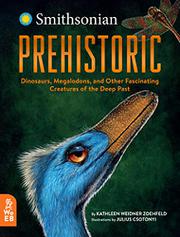 Dinosaurs, Megalodons, and Other Fascinating Creatures of the Deep Past

An illustrated overview of life’s history on Earth, moving backward from now to its beginnings 3.5 billion years ago.

Zoehfeld begins with the present epoch, using the unofficial Anthropocene moniker, then skips back 12,000 years to the beginning of the Holocene and so back by periods to the Ediacaran and its predecessors, with pauses along the way to marvel at the widespread End-Cretaceous and End-Permian extinctions. Along with offering general observations about each time’s climate and distinctive biota, she occasionally veers off for glances at climate change, food webs, or other tangential topics. In each chapter she also identifies several creatures of the era that Csotonyi illustrates, usually but not always with photographic precision in scenes that are long on action but mostly light on visible consumption or gore. If some of the landscape views are on the small side, they do feature arresting portraits of, for instance, a crocodilian Smilosuchus that seems to be 100% toothy maw and a pair of early rodents resembling fierce, horned guinea pigs dubbed Ceratogaulus. Though largely a gimmick—the chapters are independent, organized internally from early to late, and could be reshuffled into conventional order with little or no adjustment to the narrative—the reverse-time arrangement does afford an unusual angle on just how far deep time extends.

Nothing to roar over but a pleaser for fans of all things big, toothy, and extinct.