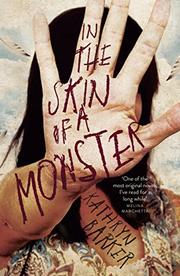 IN THE SKIN OF A MONSTER

A white teenage girl finds herself caught in a nightmare version of her own world in this affecting Australian debut.

Seventeen-year-old Alice is haunted by the memory of her identical twin sister, who came to school with a gun three years before and killed seven kids. Guilt-ridden and alienated, Alice skips school and takes long walks into the Outback as a form of self-punishment. On one such walk she crosses paths with a ghostly girl who looks like her sister; when she reaches out to grab for her, Alice finds herself in a bizarre alternate reality, having unwittingly swapped places with the girl. She soon discovers that the alternate reality is a dreamscape in which the nightmares of the townspeople play out each night, filling the dream world with deadly monsters—the deadliest of which is the schoolgirl monster who shares her face. Despite this, Alice finds herself in an uneasy alliance with dream versions of her former classmates and Lux, a mysterious boy who despises her for reasons of his own. As Alice and the gang progress through the dreamscape, the connections between the real world and the dream world are slowly untangled. Told in distinctive alternating perspectives by Alice and Lux, this nuanced story proves as gripping as it is disorienting.