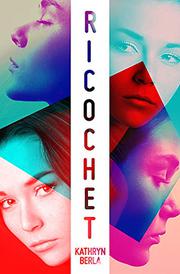 Four teenagers living in parallel universes must unravel the mystery behind their existence.

When Californian Tati sent off a saliva sample for DNA testing as part of her high school ethnic studies project, she hoped she would learn more about her Russian birthparents. Instead Tati receives inconclusive results. Meanwhile, Ana—also in California and taking ethnic studies—gets nonhuman DNA results that stall her project’s progress. Tanya lives a sheltered life with her mother in Germany while in Russia, an isolated Tatyana lives with her famous scientist father. While circumstances vary for these four Tatiana/Tatyanas, one thing remains true for all of them: unexplained seizures (or me-zures, as Tati dubs them). These seizures, they discover, bring opportunities for them to meet and communicate. As turmoil infiltrates their four universes, it’s a race against time to figure out their shared history and stop the mastermind behind it. Berla (Beau & Bett, 2019, etc.) transitions from universe to universe in an often subtle flow. Readers will enjoy puzzling out how decisions big and small reverberate across the girls’ different lives. The stakes and the tension in the climax are low, however, as conflict buildup takes a back seat to backstory. The four main characters and most others are assumed white; Tati's Indian American girlfriend, Priya, is an exception, and her family is unfortunately portrayed in a two-dimensional and negatively stereotypical way.

A lightly developed take on choice and the multiverse.